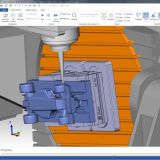 Five Vero Software brands are to be represented at the forthcoming AMB exhibition in Stuttgart between September 13 and 17.

Vero, which is part of Hexagon Manufacturing Intelligence, and was recently confirmed by CIMdata as being the world’s number-one CAM-focused company, has its own 56 square metre booth at the show, demonstrating EDGECAM, WORKNC and WORKXPLORE.

Two Vero resellers will also be highlighting further brands. Mecadat are featuring VISI, with 3D Concepts showing SURFCAM. In addition, 3D Concepts have expanded their product range and closed an agreement with GmbH to be an official EDGECAM reseller.

Vero’s German Marketing Manager, Michel Reuter, says it is the first time the company has exhibited at AMB as Vero Software GmbH. “Previously, resellers attended under their own names or with the brand name itself, but the Group name of Vero is relatively new to the German speaking markets (Germany, Austria and Switzerland). This year’s show is particularly important for us to feature Vero as the global group with a portfolio of many different brands.”

All three booths can be found in Hall 4 – Vero, with WORKNC, EDGECAM and WORKXPLORE, on C-20; Mecadat AG, with VISI, on B-36; and 3D Concepts, showing SURFCAM and EDGECAM, on C-58.  In addition, m&h inprocess, which is also part of Hexagon Manufacturing Intelligence, will be featuring a WORKNC workstation to show Hexagon’s process chain of “sensing-thinking-acting.”