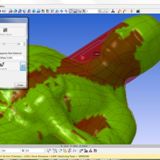 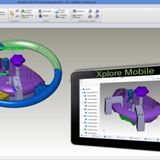 Latest WORKNC To Launch At Industrie 2015

Vero Software is launching the latest release of WORKNC at the Industrie trade fair in Lyon.

With a wide range of new and enhanced functionality, Product Manager Miguel Johann says visitors will be astounded at the extent WORKNC Version 24 improves CAM operator productivity and machining quality even further.

“The new Rest Material Display has been enhanced, transforming it into a genuine analysis tool to aid CAM programmers in their perpetual quest to reduce machining preparation times.” It allows for the different amounts of rest material left on the model, to be rapidly evaluated according to user defined color ranges. On large models and even on extremely complex components it is easy for users to determine the small zones or pockets that still need to be machined.

“Industrie is the most important trade fair in France, expected to attract over 20,000 visitors, a quarter being engineers, 21 per cent corporate managers and 17 per cent departmental managers. In other words, decision makers and prime contractors, for whom WORKNC and the other Vero CAD/CAM software on show, can provide the optimum solution for their requirements.”

Visitors to booth Y 87 in Hall 6 at the Eurexpo Lyon Exhibition Centre from April 7 - 10 will see that WORKNC Version 24 features a set of standard collision detection functions covering the machining environment, tool holder, stock and machining center. “For 3-axis and 3+2 axis the WORKNC collision detection module indicates the shortest possible cutter than can be used. For 5-axis the Auto5 module determines the best possible conditions for a user-defined cutting tool. Special attention’s been given to optimize cutting conditions for features such as ribs and narrow slots.”

Remachining strategies have been completely revamped, giving greater precision in detecting the areas to be remachined, smoother trajectories, and improved surface finish quality.

A number of components and products programmed with WORKNC will feature on the booth, including an engine block and a motorsport prototype wheel carrier, and a pilot’s helmet, along with the chassis of a Tech 3 competition motorbike competing in the Moto2 World Championships machined on a 5-axis DMG Mori Seiki milling center by Aravis Precision.

The exhibition also sees the French launch of EDGECAM 2015 R1, which includes a brand new Waveform roughing cycle for turning. Based on the successful milling waveform technology, the toolpath maintains a constant cutting load. The release introduces further Workflow enhancements by supporting multiple setups for both milling and turning, meaning the component, stock and fixtures, can be passed to new machining sequences. It promotes the use of a single CAM file to house multiple machining setups, ensuring the stock remains associative between setups.

WORKPLAN 2015 R2 will also be on display – showing project management processes, 3D integration, and CAD data integration from quotation to shop floor – as will VISI 21, one of the world's leading PC-based CAD CAM software solutions for mold and tooling design and production.

And WORKXPLORE 3D 2015 is a major new release of the software which contains many features usually only found in CAD systems, enabling the user to perform diagnostics, create assembly instructions and prepare the production of 3D models. Technical Manager Philippe Deletang says it focuses on new functions and improvements, providing solutions for mobility, realistic animations, and processing large files.

“Thanks to the new Xplore Mobile application, geometric items – models 3D models, and ancillary data such as annotations, measurements and wireframes – can now be exported to Android and IOS mobile platforms, providing WORKXPLORE 3D data to be accessed on the move.”

The animation engine has been completely reviewed to make animation sequences more realistic, while simpler to create.

A new batch conversion process switches large native standard CAD files, or a large number of files, to WORKXPLORE 3D format. In previous versions of the software the application could not be used during the conversion process, but the new tool means the file is converted in the background, while the user continues to work as normal.