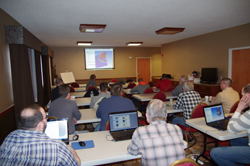 A debut series of WORKNC Lunch-N-Lean events were met with success in March, when par-ticipating WORKNC customers gathered in four locations to receive instruction on how to best maximize the tools at their disposal.

The events, which included a day of instruction and complimentary lunch, were hosted at no charge to customers in Akron and Cincinnati, Oh.; Chicago, Ill.; Milwaukee, Wis., and Southfield, Mich.

“They were all filled,” Jeff Jaje, technical support manager for WORKNC, said of the premier series. “The response was fantastic, and people are looking forward to our future lunch-n-learn events.”

In addition to serving as a platform for valuable instruction, the series provided valuable “face time” between customers and WORKNC technical personnel, who used the interaction to identify trends among customers. “We can address what we see from the standpoint of what they may be struggling with,” Jaje said.

Among the topics covered in the debut series were holes in feature milling, adding fixtures, machine-collision checking, and machining contexts — or creating digital models of machine tools.

“Every lunch-n-learn event I’ve ever attended involved someone standing up there for three hours, talking about some great things — but you don’t get to do anything with it,” says Shawn Schwartz, sales and services director for WORKNC North America. “A focus for us was a hands-on approach, with a smaller, more intimate crowd.”

That smaller crowd included a maximum of 16 attendees who were encouraged to practice what they learned on any of four computers provided for the events.

“It was really a different event, in that we didn’t simply present information and hope it sticks,” Schwartz says. “I hope that the customers feel that they got something more out of it.”

Rob Riley, a WORKNC customer who attended a WORKNC lunch-n-learn, feels that his partici-pation was time well spent.

“I learned a lot,” he said. “I thought it was awesome; it was well worth it.”

The next series of WORKNC Lunch-N-Learn events, coming in the second quarter of 2015, will include instruction on the software’s latest release, Version 24.

About WORKNC
WORKNC CAM software is the premier automatic CNC software for surface or solid models in mold, die and tooling businesses for 2 to 5-axis CNC programming. WORKNC is used by all western, Japanese and Korean automotive makers and well-known OEMs from a range of other industries.