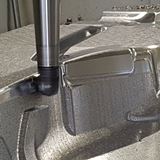 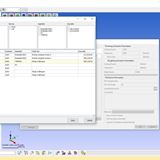 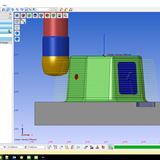 The latest release of WORKNC allows users to break free from previous constraints caused by tool shapes, slashing cycle times by up to 74 per cent.

WORKNC 2019 R1 adds the Z-Level pattern to the Advanced Toolform technology, allowing for tool shapes like barrels, ovals, and parabolic to be calculated over the part surfaces, including negative allowances.

Brand Manager Miguel Johann says the new pattern, combined with the ability to define the slope angles that the toolpath will cut on, make this toolpath the most modern technique for part finishing.

“Where before, these high feed cutters could only be used to rough or semi-finish the part, as the allowances were not constant, the constraints are now removed and WORKNC customers can reduce their finishing times by half, doubling productivity.

“In extensive cutting tests that we carried out before releasing the software, gains varied from 47 per cent up to 74 per cent, depending on the individual tool and part shapes. We encourage all our users to discuss the benefits of circle-segment tools, with their tooling suppliers.

“Mould cutting tools will always benefit from cutting in 3-axis instead of 5-axis where possible, and circle-segment tools especially designed for molds should not have a radius too big as to miss the benefit of flexibility.

“While theory explains to us that the larger the radius, the bigger the gain in spacing the stepover, in practice the parts we cut are not formed purely of long, flat faces. We need the gain from the big radius, but we also need the flexibility of using the tool’s and part’s curvature to the maximum.”

Another important improvement in WORKNC 2019 R1 is the strengthened link with WORKPLAN, Vero Software’s ERP solution for the Mold and Die market. “WORKNC is an essential part of the workflow process, and can readily be integrated into a manufacturer’s entire production ecosystem.”

WORKPLAN Brand Manager Christophe Mas says “Integrating with other Vero products remains a high priority for us, which is why we were keen to launch this new interface between WORKPLAN and WORKNC. It allows a number of production tasks to be directly managed by the WORKNC program code, and also means the workzone can be stored in WORKPLAN’s data base.”

Miguel Johann confirms that, saying manufacturers cannot afford the inefficiency of having to retype any piece of information that is already in another part of their digital thread.”

“As a manufacturing solution provider we’re keenly aware of that, which is why we’ve made it much easier to link with vital production control information.”